Most people have never been in a fight. Those of you that have know that it’s one of the most physically exhausting things that you can do. Those of you that haven’t just think about professional fighters. UFC fights are - at a maximum - 15 minutes long (5 rounds x 3 minutes a round). To prepare for these 15 minutes, fighters will train for months, putting in hundreds of hours of sparring, strength work, and conditioning to get into fighting shape. Few other sports require such intense training for such a short competition. 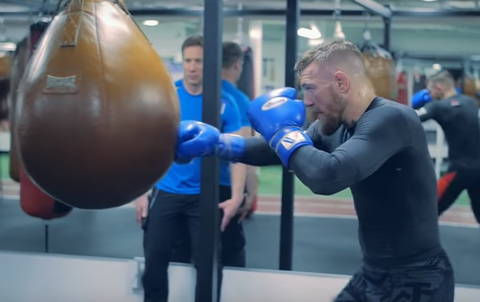 Despite the rigorous demands of fighting, Jack Burke and Andy Bowen were able to fight for so long that the referee called the match because the fighters were too exhausted to continue. Remember when we said that a UFC fight is 5 rounds max? Burke and Bowen fought 110. At three minutes per round, that puts the total fight time at 7 hours and 19 minutes. What could possibly compel two men to fight for over 7 hours? The 1893 lightweight title of the South and $2500 — $60K in today’s dollars.

Since this took place 125 years ago, we don’t know much about the two fighters. What we do know is that Burke is 22 years old and goes by “Irish Lad”. Bowen is a 26 year-old blacksmith from New Orleans. That’s about it, so let’s get to the fight. 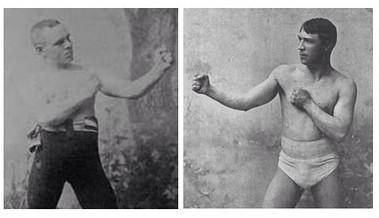 The night of the fight, nine thousand fans show up to see the lightweight showdown of the South. The first bell rings at 8pm to start the bout and after that we only get periodic updates - remember this is less than 30 years after the end of the Civil War. Still, we think that it’s safe to say that spectators get their money’s worth and then some.

By Round 30 (two-hour mark), the crowd is in one of three camps: they left, they’re calling for a draw, or they’re sleeping. Not at all deterred by the less-than-enthusiastic crowd, Bowen and Burke fight on. 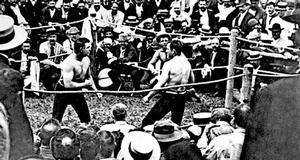 By Round 50 (past three hours), most of the crowd is completely checked out and Burke has broken both of his wrists from the countless punches that he has delivered to Bowen’s head. As they are wearing gloves, you can imagine that those punches must’ve been pretty hard. The crowd is significantly smaller at this point, the cheers died off long ago, and the only sounds are the thuds and grunts coming from the ring.

After round 50, we can only assume that whoever was recording fell asleep or left because we don’t get any more updates until the end of the fight — 60 rounds later. At round 110, both men are completely exhausted and can't physically throw a punch. The referee calls the fight. Burke and Bowen have each lost 10 pounds since the beginning of the fight. 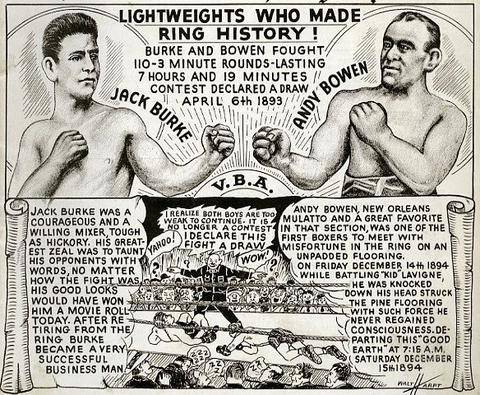 Before the fight, if you had asked either of those men whether they could fight each other for 7 hours, they would have said no. But they did. They were able to endure one of the most physically demanding activities for 7 hours because mentally they didn’t have to fight 7 hours. They only had to fight 3 minutes at a time. That’s it. All they had to do was tell themselves to make it one more 3-minute round. They just did it over and over and over again until they reached their physical limits.

This is something that we’ve highlighted before with almost every individual we've featured. One of the reasons that they are able to accomplish such seemingly inhuman feats is because they can break those feats up into many, many achievable ones. Look at the next step, not the next mountain. Swim one more stroke, not one more hour. Make it to the end of the round, not the end of the fight.

The beautiful part about this mentality is that it doesn’t just apply to physical feats — it applies to anything that you want to do. Trying to eat clean? Eat clean for the next meal, not the next month. Want to save up to buy a house? Save the next dollar, not the next thousand. Have to read a book? Read the next paragraph, not the next chapter. It seems like the key to succeeding should be more complex, but it’s not. All you need is some focus, discipline, and will.